The mining boom is set to give birth to another Toyota workhorse with a new dual-cab ute variant of the LandCruiser 70-Series.

Toyota’s work truck namesake to the LandCruiser 200-Series 4WD is currently available in Cab Chassis, Troop Carrier and Wagon forms, though a CarAdvice source says the Japanese brand will respond to demand from mining companies to produce the fourth, passenger-friendly variant.

The dual-cab 70-Series ute is expected towards the end of the year and follows a features-pared base ‘standard grade’ version of the 200-Series LandCruiser introduced last year for mining companies.

Toyota Australia is not yet officially confirming the model, which has yet to be revealed.

“We can neither confirm nor deny such a model,” company spokesman Mike Breen tellingly told CarAdvice.

The dual-cab ute variant will allow mining companies to have a more versatile vehicle that can carry more passengers than the three-seater ’79-Series’ Cab Chassis version (pictured) while still offering the practicality of a tray back. 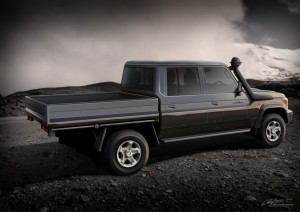 The dual-cab is likely to be powered by the same 4.5-litre V8 turbo diesel engine that was introduced on the Toyota LandCruiser 70-Series, which dates backs to the early 1980s, in March 2007.

It produces 151kW of power and 430Nm of torque, distributed to the wheels via a five-speed manual gearbox.

The LandCruiser 70-Series develops that peak torque from just off idle at 1200rpm to 3200rpm – giving it a significant tree stump-pulling advantage over Toyota’s highly popular HiLux dual-cab ute that produces 343Nm from its 3.0-litre four-cylinder turbo diesel.

The 70-Series has a braked towing capacity of 3500kg compared with the HiLux’s figure of 2500kg.

The LandCruiser 70-Series, which starts at $58,240, sits on old-school underpinnings including rigid live axles and rear leaf springs.

Fuel consumption for the 70-Series Cab Chassis is officially rated at 11.5L/100km.

The Toyota LandCruiser 70-Series has been an industry mainstay for decades thanks to its towing and no-nonsense capabilities.

The workhorse’s credentials were first established in Australia with the FJ25 versions employed in 1958 on the Snowy Mountains Hydro-Electric scheme.